Soils across the metropolitan area vary greatly and gardeners can easily run foul of soil problems with frustrating results. Simple tests can help unlock any mysteries here and get you on the way to greater success.

Some folks think that our soil is just gutless sand.  While an average depth of 20 metres and extending from the coast to the Darling Range, there are many differences in these sands.  Banksia woodlands are home to the worlds least fertile soils according to the United Nations we call this type Bassendean sands. These grey sands are characterised by low levels of carbon as well as nutrients.  They tend to be acid reacting particularly when the area contains wetlands or just low lying country.  Along the coast you will find limey sand with a high pH, the measure of acidity or alkalinity.  In a thin band, along the edge of rivers, can be found rich red or black loam soils brilliant horticultural areas that once were orchards, heavily planted with citrus grape, apricot, peach and plum. Move up to the top of the Darling Range and there are pockets of clay as well as thin gravelly soils.

When developers move in to prepare a new suburb for housing or industrial development, they commonly bring in sand to level out the base. This changes the character of the soil again as typically this is mined from deep layers within sand pits and are essentially lifeless and virtually sterile. 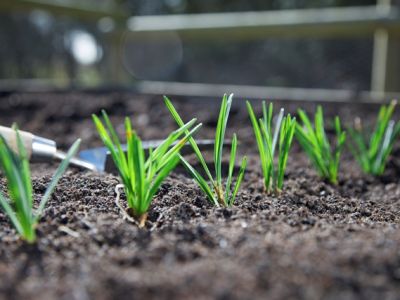 When developers move in to prepare a new suburb for housing or industrial development, they commonly bring in sand to level out the base.  This changes the character of the soil again as typically this is mined from deep layers within sand pits and are essentially lifeless and virtually sterile.

Here are some simple soil tests you can run at home to give you a better picture of what you are dealing with.

The settling test shows what are the main constituents that make up your soil.

Take a clear glass jar and half fill with water.  Pour soil from your garden to make about a third of the volume then top up with water to within a centimetre at the top.  Put lid on and shake the mixture vigorously then place the jar on a surface and allow to settle. If the soil consists of clay, silt and sand then it may take a few hours to fully settle into layers. My sample took only minutes to show an even coloured, grey layer of sand at the base and a thin black layer sitting on top of the sand. On top of the water was another even thinner black layer.  This sand contained zero silt, which is a very fine powder-like material, and zero clay, which consists of microscopic flakes.  Loam soils consist of a mix of the three segments, which settle out as sand on the bottom, followed by silt and then clay on top. A perfect sandy loam would break down as 20% clay 40% silt and 40% sand.  If your test comes in like this then buy a lotto ticket as you have hit the jackpot, because around Perth, this occurs in very rare pockets.

Most likely you will get a result like mine about 95% sand and 5% black humus.  The presence of the humus layer does reflect the additions of compost added to the garden over the years and would rate as a pretty good sandy soil. Adding small amounts of clay is good value to such sands as it assists in improving both moisture holding and mineral holding capacity.

The roll and squeeze test also indicates the makeup of your soil.Grab about half a handful of moist soil (after rain or irrigation) and roll into a ball.  If it will not form a ball it is mostly or all, sand.  If it will make a ball try squeezing the soil to make a sausage. If it crumbles then you have a mixture of sand and clay, which is a positive.  If you are able to squeeze out a ribbon, which holds its shape, then you have a clay soil.

The worm test .Choose an area of your garden that has not been recently cultivated, is not in full sun and is moist. The ideal time for this test is in the morning.  Dig a hole about 30cm by 30cm by 30 cm deep.  Place the soil on a tarp or even newspaper.  Position a garden sieve over the hole.  Scoop the soil through the sieve, back into the hole counting the earthworms you find.   More than ten worms means your soil is in tip top condition, 5 to 10 suggests some more organic matter could be added and less than five suggest a desperate need for additional compost.

At a cost of around $20 you can pick up a pH soil test kit from your local garden centre. This will allow you to run dozens of tests.  The kit consists of a liquid indicator that is applied to moisten the sample. A plastic dibber can be used to mix the solution evenly through the soil sample.  Next, a powder is applied a puffer bottle to the wet sample.  This powder changes colour in response to different pH levels.  Wait a couple of minutes before comparing the colour of the treated sample to the chart.  The sample I used looks to be about 5.5, which says the soil is acid and probably ideal for such plants as azalea, blueberry and gardenia.  The majority of plants do best in soils in the range of 6 to 7.5.

Once you have determined the pH of your soil you can take a number of approaches.  Let us say it came in at 8.5, highly alkaline. You can seek out lime loving plants such as olive, lavender, chenille honey myrtle and native cushion bush. Alternatively, you can lower the pH by applying sulphur powder or iron sulphate to the soil. This needs to be done gradually in small quantities over years rather than a giant single dump of an application.

On the other end of the pH spectrum if your soil is extremely acid, say around 4 you can find plants that will tolerate such conditions or slowly adjust the pH up by applying garden lime.

Preparing your soil. Classical music lovers are likely to say everything goes better with Mozart. When it comes to soil its true that every type works better when mixed with compost.  Compost builds moisture holding capacity and also helps nutrient holding in sandy soils.

If you are fortunate to have good loamy soil, then soil improvers can still help to make these soils even more productive. Clay soils suffer from the problem of poor drainage as the tiny flake that make it up pack together and make moisture movement slow, which is not beneficial for most plants.  Adding compost helps to improve the structure of clay soils and this improves drainage at the same time.  I recommend  Baileys Soil Improver Plus