Browse our range of premium, West Australian made, garden and lawn products.

You can now purchase a selection of our products online and have them delivered to your doorstep.

Get our latest news, product information and gardening advice.

The Need To Mulch

With Christmas getting closer, now is a good time to enhance the appearance of your garden by applying Baileys Moisture Mulch.  This does a lot more than make the garden look great, it also helps to cool soil as well as the garden, reduces evaporation, increases soil water retention, suppresses weed germination, allows rain infiltration and adds organic matter to existing garden areas. 'Bare soil is dead soil' is one of Mother Nature's guiding principles.  Our scorching summer sun can burn the vital soil carbon from uncovered topsoil, further reducing its fertility.  Mulch cools the soil which benefits plants and soil living organisms.

It is composted over an 8 week cycle, screened to achieve a chunky texture, complies with the Australian Standard for Composted Soil Conditioners and Mulch, it's versatile, long lasting and dark brown in colour. Moisture Mulch contains no artificial colourings.  As it is made from selected waste materials, mainly pine bark and manure, it stops these materials being sent to landfill.

Being an organic material, it will eventually be taken into the earth by soil borne organisms and converted to humus. This benefits soil living organisms, which are the real drivers of successful plant growth. This mulch also bears the stamp of Smart Approved and Waterwise Approved Product. Because it has a stable pH it can help extreme soil types to move toward a more neutral pH.  This is of benefit when used with acid as well as alkaline soils. I like the fact that it is formulated right here in WA to suit our unique soils and climate. 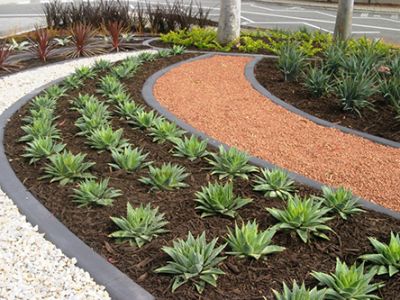 What do the Australian Standard red ticks on the bag mean?

This shows the mix is formulated to conform to a highly detailed published standard. The mulch is batch tested to ensure freedom from pathogens, both human and plant types, weed seeds or even parts of plants that can set up any weed infestation, contamination from heavy metal concentrations, rubbish contamination as well as excessive salt which can have a serious effect on plant growth. The testing also makes sure the mulch contains optimal sized particle, not to fine to obstruct infiltration or too large to retain soil moisture.

Mulches that comply must be wettable; this ensures that applying these materials won't make worse, any tendencies within your soil to repel moisture. In all, there are a minimum 13 tests that need to be passed in order for the mulch to qualify to wear the Australian Standard ticks on the bag.

What are the differences between composted and non-composted mulch?

The benefit of having a composted material is that it won't drawdown nitrogen; which can lead to stunting and yellowing of your plants. There is an epidemic of tree diseases around WA, some of which can be spread through the use of un-composted mulch. Composting pasteurises the material killing off the pathogens but at the same time allowing beneficial organisms to survive and thrive in a benign environment.

Are there different types of mulch you should use for garden, landscaping, pots, planters, trees and shrubs as well as vegetables?

Chunky mulch like Moisture Mulch is a great choice for garden beds and all landscape areas. This also works well when placed around the top of pots and garden planter boxes.

I would use Baileys Soil Improver as mulch in the vegetable garden as it quickly becomes soil for the following crop.  In doing so it raises the organic carbon content of your high production soil making it rich, fertile and highly productive.

How to apply mulch for the best results?

Thickness matters with mulch applications, as came to light during research undertaken at South Metropolitan TAFE Murdoch, where a selection of mulches were being trialled. The surprising finding was that no matter what the texture of the mulch; at application rates over 100mm thick, all mulch inhibited rain penetration. The recommendation arising from this research is that mulch be applied between 50 and 75mm thick. I would always water the soil well before applying mulch and then I would immediately water down the applied mulch to ensure the whole system is wetted down. I would also avoid piling mulch up against the stem or trunk as this can sometimes lead to collar rot setting in.

So it's easy to see why I reckon mulching your entire garden is one of the best things you can do as summer approaches.